To share your memory on the wall of Inge Clara Amanda Kraut Engelhardt, sign in using one of the following options:

Inge C. Engelhardt was born in Hamburg, Germany on November 11, 1922, and passed out of this life on November 14, 2020 in Somers, NY. She immigrated to the U. S. in 1927 with her mother Martha Freese Kraut, and sister Gerda, on the Bremen, sailing into New York Harbor. Her father Georg Kraut had come earlier and prepared for their arrival. They crossed the country to Oakland, California, and came back to Chicago, where the family lived until 1930, when they moved East to the Town of Somers and then Croton Falls for most of the rest of her life. A baby brother, George P. was born in Somers in 1933, but has been outlived by his older sisters (d. Nov. 23, 2015). The family did live in Rhode Island for a period during WWII, but returned to Somers, then Croton Falls after the War.

Inge C. A. Kraut graduated from Purdys (Central) High School in 1940, with special courses in Business, was an accomplished artist, and an avid photographer. She was a gardener and loved her flowers. She cultivated the hill in her yard until she could no longer manage. Inge was very interested in health-related matters and enjoyed cooking her own healthy food. She loved Broadway shows, music and opera. She had an impressive miniature owl collection, and kept interested in health matters, animals and flowers to the end of her life.

In her working world, Inge became a secretary at McCutcheon’s in NYC, where she stayed until the 1950s, then worked as a legal secretary closer to home. After leaving legal secretarial work behind, she became what would be an administrative assistant in today’s language at the firm of Engelhardt and Engelhardt, an education consultant firm in Purdys, NY. She stayed with that company until it dissolved.

A service will be held on Friday, November 20 at 11:00AM at the Croton Falls Chapel on Route 22 in Croton Falls. Masks required.
Read Less

We encourage you to share your most beloved memories of Inge Clara Amanda Kraut here, so that the family and other loved ones can always see it. You can upload cherished photographs, or share your favorite stories, and can even comment on those shared by others. 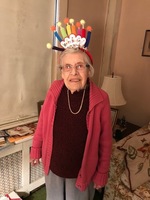