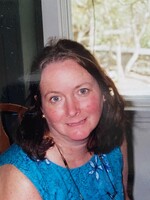 Mary Marguerite (Clark)Whalen died on April 7, 2021 in Danbury, Connecticut after a brief hospitalization. She was surrounded all morning by her loving family, who only wished they had more time with her. She was 69 years old.

Mary was born in Syracuse, New York, the daughter of Marguerite and John Clark, who she dearly loved. She was a graduate of Colby Sawyer and Marymount College. She received her Masters in Education from Western State University and attended Southern Connecticut University for further studies in special education. Mary taught home economics for 35 years at John Jay Middle School in Cross River, New York, teaching life skills to generations of students with patience, creativity and artistry.

In 1973, she married her high school sweetheart, Joseph Whalen. Together they made their home in Brewster, New York, Danbury, Connecticut and Peaks Island, Maine. They raised three children, Joseph, Michael and Kathleen and surrounded them with love and support. Her husband, Joe, spent his working years at Green Chimneys in Brewster, N.Y retiring in 2017 as its Executive Director. Mary was a true partner to his dedication to the children under his care. Irish and elegant, Mary gave the best parties and worked on numerous galas, fundraisers, and events for Green Chimneys. She produced their first magazine, one of the many accomplishments of her, behind the scenes, support to Joe.

Mary could set a table, decorate a room and cook a meal with ease. She made her home a haven for her family and friends and especially her beloved grandchildren. A graceful and unselfish caretaker, Mary cared for her mother who had Alzheimer’s for 17 years. She cared for Joe’s parents, Edna and Joe Whalen with the same love until their deaths in 1998. She did the same for her brother John, who was developmentally disabled, caring for him until his death in 2016.

In retirement, she enjoyed best her time on Peaks Island in Maine, watching sunsets and being the first mate to Joe on his boat as in life.

Mary was predeceased by her parents and her sister Barbra Greenbaum and brother, John Clark. Mary is survived by her husband, Joe, her children Joseph (Erika), Michael (Karen) and Kathleen (Chris) and her grandchildren, Sofia, Jack, Ryan, Gavin, Owen and Joey. She leaves behind her brother, Richard Clark (Laura), her sister- in- law, Patricia Whalen (Fletcher) and nieces and nephews in Florida, Pennsylvania, Ohio and Vermont.

A celebration of her life will take place at 10:30a.m. on Friday, May 7, 2021 at The Church of St. John and St. Mary, in Chappaqua, New York. Friends may call on Thursday, May 6th at the Beecher Funeral Home, 1 Putnam Avenue, Brewster, NY from 4 to 8pm. www.beecherfuneralhome.com